And the reason why is Donald Trump.

“He is the star of the show,” said Eric Herzik, a political science professor at the University of Nevada, Reno. “He is the reason why everybody is tuning in.

“Donald Trump has seized the imagination of the early part of this process,” Herzik said.

Trump, the business mogul who holds double-digit leads over his GOP competitors in some of the latest and most credible national polls, will literally and figurative be at center stage Thursday. 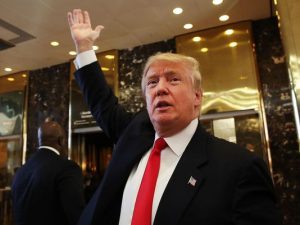 “Everyone is tuning into watch just to see what he (Trump) will say because he has been very blunt and vocal in his attacks, his personal attacks on some of the folks running against him,” said Tray Abney, the director of government relations for The Chamber of Reno and Sparks. “So everyone will be tuning in to see how Trump will handle himself.”

Trump will be stationed in the middle of the 10-candidate debate, along with establishment favorite Jeb Bush, the former governor of Florida and the brother of former President George W. Bush.

“Trump is already the central figure…” Abney said. “All of the other nine just kind of blend into the background.”

The nationally televised debate will begin at 6 p.m. on Fox News. The debate will feature the top 10 polling presidential candidates and go for two hours. It is co-hosted by Facebook.

Earlier Thursday at 2 p.m., Fox will televise a debate with the remaining seven GOP candidates, those who did not make the cutoff for the main debate.

“People are talking about this,” said Fred Lokken, a political science professor at Truckee Meadows Community College. “But if you take Trump out of it, none of the other candidates would be able to be near the level of interest he’ll generate.”

But the interest in the debate is like fans of a NASCAR race, where some tune in to watch the cars crash.

“People will tuned in just to see if Trump is Trump or if Trump will implode,” Lokken said.

“In this case, there has been a lot of buzz,” Lokken said. “Even the other news channels are covering Fox because of the debate. And so I think we are going to be surprised by the number of people who watch.”

Trump, perched atop the polls, has more to lose than the other nine candidates in this debate, said Eric Herzik, a political science professor at the University of Nevada, Reno.

“The stakes are, in effect, highest for him,” Herzik said of Trump. “If he comes off as a blowhard and if the questioners and the other candidates are able to show weaknesses in his presentation, then he will start to fade. I’ve compared it (Trump phenomena) in the past to watching the Kardashians; you certainly get tired of that.”

It may not be the right strategy to attack Trump, Abney said.

“I don’t know. Do you go after the guy who is double polling or do you (as a candidate) try to break through and say (about Trump), ‘That’s fine, it’s easy to make simple statements but let me tell you what is really going on here,'” Abney said.

“I don’t know if they will go after him or just let him put his foot in his mouth,” Abney said.

Cal Thomas, the national columnist, told USA Today that Trump must offer specifics during the debate.

“He has tapped into growing voter anger about the failure of government to do anything well,” Thomas told USA Today. “Trump must offer specifics on domestic and foreign policy. I’d also like to know how and why he converted from pro-choice to pro-life in 2011. Expediency or ‘conversion’? Question: You talk tough about world leaders you say you would confront, but why should Russian President Vladimir Putin and Chinese leaders respect you?”

Robert Uithoven, who oversees the Nevada presidential campaign of Sen. Ted Cruz, R-Texas, said the Trump factor may be overrated since Trump will not be able to monopolize the time. The debate is designed to give equal time to all 10 candidates. Cruz will also be on stage during the debate with Trump.

“It’s not like he is going to be able to occupy more time,” Uithoven said of Trump. “I think the time is going to be pretty limited for people sharing two hours of stage time together. So I think it is good to have a wide-open debate and viewers will be able to pull away little bits and pieces, maybe enough to solidify their thinking on who they should get behind.”

Uithoven sees the debate as a way for Cruz to show his conservative moxie.

Hillary Clinton, the Democratic front-runner, will use the GOP debate as a way to get her message out to voters.

In Nevada, Clinton phone banks, staffed with volunteers, will begin to call voters as soon as the debate is complete.

“While GOP candidates attack each other on stage, the Hillary for Nevada team will reach out to Nevadans and get them engaged in our campaign,” said Clinton’s Nevada State Director Emmy Ruiz.

Second-tier debate: Fox News will televise a debate with the remaining seven GOP candidates, those who did not make the cutoff for the main debate, 2 p.m.